Memory palaces and the periodic table

Welcoming 2021 with a bang (this time a good thing) 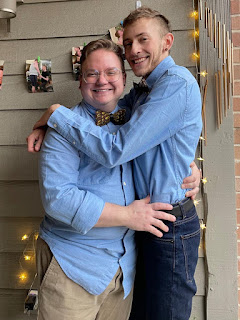 Our family has some big news to share from today, but once again, I'm going to back up and share a bit about yesterday (New Year's Eve) first.  New Year's Eve was both fun and rotten all at the same time. As I had anticipated, the fall-out from R.'s adventures with the dentist the previous day was significant. The entire day was spent with her having psychogenic seizures and some psychosis and me and J. tag-teaming each other to stay by her and keep her calm. We've learned that with support and work with mindfulness exercises, we can keep her in the present and hold the seizures and panic at bay. On a day like yesterday, though, she needs this support nearly continuously. She stayed up to welcome the New Year, but because she doesn't sleep in this state, she would have been up anyway.  And we did celebrate New Year's Eve. Everyone was home and we ate and played games and laughed and toasted in the new year. I hadn't bought a new game for the family at Ch
Read more

Fair warning, this post may make some of you very unhappy. In fact, I have a suspicion that I will lose more than a couple of readers over it. Sometimes sharing a hard story is more important than worrying about how people will perceive you as a result. That said, I have a picture to share with you. This is B., in the yellow. I want you to look very closely at his arms. Do you see what color they are? That orange tint you see is pepper spray. I want you to look very closely again. See those big red crosses on his shirt? It seems pretty darn clear that he is a medic. (And yes, he is trained and has passed his EMT licensing.) A medic who not too long after this photo was taken was thrown to the ground so hard that the respirator he is wearing was broken. If he hadn't been wearing a helmet, his head would have been broken as well. No, he has not gone around the world to perceived dangerous countries where he is putting his life on the line. This was from this past Saturday in o
Read more

November 12, 2020
That would be the J.'s test result that took nearly a week to come back. Since that time, quite a few people in the house have gotten sick and recovered. I'm much, much better and J. is improving. The few who have not succumbed are holing up in their rooms trying to avoid the rest of us. While we have felt not great, I think it is safe to say that we have had a mild experience with this virus. We are looking at about ten more days of quarantine, though. I spent some time this afternoon cancelling classes and lesson I was teaching. I hope the weather cooperates and we can make them up after Thanksgiving. I still have one doctor's appointment for R. that was scheduled for next week that I need to reschedule. And suddenly, I find myself with ten days with nothing on the calendar. I can't say I'm terribly upset about that. Since I am feeling better, the first day or so is going to be spent trying to dig out from under the disaster that has become the house while I sat o
Read more

Here some articles I've written which appear elsewhere. You can also find my writing at The End in Mind and Adoption.com
Taming the Teenage Schedule
***
5 Secrets to Surviving the Toddler Years
***
Raising Creative Kids
***
The Family that Cooks Together
***
Adopting and 11th Child
***
Dear Struggling Mother, part 1 of 2
***
Dear Struggling Mother, part 2 of 2
***
A Winter's Worth of Books
***
Adopting a Child with a Facial Difference
***
Looking Past the Needs to See the Child