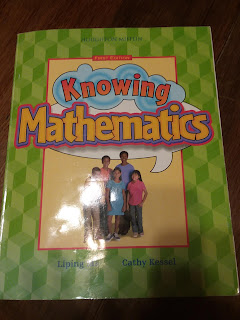 Talking about our new math curriculum seemed really vital to some readers, so I'll write about it before I forget.  It all started when I read the book Knowing and Teaching Elementary Mathematics: Teachers' Understanding of Fundamental Mathematics in China and the United States by Liping Ma  last year. (I linked to the post I wrote about it.) I know it sounds like someone's dissertations, and in fact it is. For those of us who had less-than-spectacular math experiences in grade school, it is also a complete eye opener.  I don't know about you, but just like described in the book, so much of my math instructions was summed up by the 'learn the trick' method. As far as I was aware, there was little to no explanation of the why we did things we way we did. Why did we carry a number? Why did borrowing work? Why did we add a zero or move over a spot when doing multi-digit multiplication? I had no real idea. I did the trick, I got the right answer, I got placed in the
2 comments
Read more 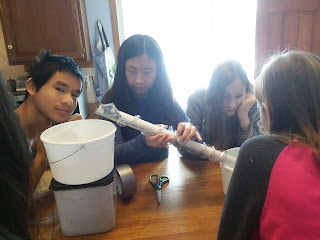 It's Friday, though I've been fairly confused about what day it actually is all week. It's a real disappointment when you keep thinking it is Friday and you discover (over and over again) that it is not.  Let's start with the biggest news which just happened today. D. received the BIG envelope from Valparaiso University. Not only was he accepted, but he was offered some pretty hefty scholarships to boot. There was a straight academic scholarship and also an engineering scholarship (which is what he wants to major it.) He was pretty excited, and we are very proud of him. One down, five more to go.  I got to go see A.'s new apartment today. It is really nice. Far nicer than any apartment I ever lived in. And it's only fifteen minutes from our house. And it has easy parking.  When you have lost everyone and everything that is important to you, not once, but twice, having a big sister move out and a big brother planning on moving out is very, very hard. In other big
2 comments
Read more 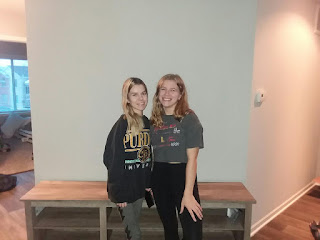 Today was a big day. It was the day the A. moved into her new apartment. I haven't seen it yet, but I hope to get there soon. She is very happy and excited. Here is A. (right) with her roommate in their new digs. J., B., and W. went to help move furniture and assemble things. Not everyone is excited. H. and R. are not happy about A. moving and we have done a lot of assuring that we will see her often. Actually, they are unhappy that A. and Olive are moving out. I think H. is going to miss Olive the most. Olive herself is not quite so happy at this moment. She is still here, but A. will be picking her up in a little bit. All Olive knows is that A. isn't here but a lot of boxes and things got moved out. She is pretty unhappy even with the prescription anti-anxiety drug that the vet prescribed for her to help her get through the next couple of days. She'll feel better once she sees A. again. In the meantime, once all of A.'s things were out of her room here, it was time fo
2 comments
Read more

January 13, 2021
I had a revelation today which involves lemmings. I grew up having learned certain things about the little animals; things that involved over-population and cliffs and things. If you were also a child of the 70's or earlier, you probably know exactly what I am talking about. My first revelation is that this fixation with lemmings did not continue to younger generations. I asked people in my house tonight what they knew about lemmings, and my very natural history minded children pretty much all said, "Huh? What are they?"  So for those younger people who read my blog, who share my children's confusion over lemmings, I'll give you a little primer. Lemmings are little rodents who are related to hamsters and gerbils in who in arctic tundra biomes. Growing up, it was a long-held belief that when the population of these little creatures grew too large to support their numbers, they would commit mass suicide by leaping off cliffs into the ocean. Having learned this "
Post a Comment
Read more

January 12, 2021
Five years ago today, we officially adopted R. as our daughter ; just four days before we had adopted Y . in another province. It has been a roller coaster.  As so often happens, because we had been on a roller coaster parenting-wise for a while, we blithely thought we knew what we were doing, what we were in for. How wrong we were. To recap for those who are newer, we adopted both Y. and R. on the same adoption trip, spending three weeks in China as we traveled to various provinces to meet children and complete paperwork. This was just a couple of weeks after we received the phone call that my father had unexpectedly died . To say we were all off balance would be an understatement.  To add to the grief and chaos of that time, less than a month after we returned home, our three year old labrador died from systemic cancer that we were unaware that she had. Looking back, I'm sure we were all walking zombies as we slowly processed all the changes just two months had brought. It was h
Post a Comment
Read more

January 11, 2021
My schedule changed for this semester, so my grocery shopping trip has moved from Tuesday to Monday. The good news is that I was able to go to the store myself today and didn't need to send children. It is definitely a step in the right direction. Monday, Jan. 11 Chicken gyros      We've made this for years. It's easy and yummy. We serve it with chopped tomatoes and cucumbers as well as a yogurt sauce with garlic, dill, and lemon juice. Pita Rice Tuesday, Jan. 12 Tacos      A stand-by we haven't had in a while Refried beans      From scratch Wednesday, Jan. 13 French onion soup      What do you make when you have an entire wheel of Swiss cheese leftover from Christmas and you own The Art of French Cooking? French onion soup! I'm excited since it is one of my favorite soups. There will probably be complaints from my non-onion loving children. (You would think they would love them by now considering I put onions in nearly everything.) Salad Thursday, Jan. 14 Green chi
Post a Comment
Read more 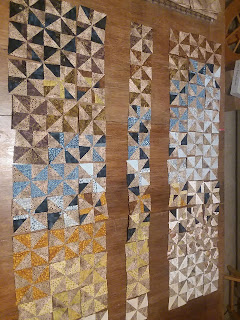 Yesterday K.'s last Christmas present arrived. It was a CD of various selections of film music composed and conducted by John Williams. K. loves it as much as I thought he would. What this means is that since yesterday afternoon, much of our life has been lived to the accompaniment of The Imperial March. Sometimes we also get to hear the main Star Wars theme and Luke and Leia's them. Very infrequently there is a brief bit of Raiders of the Lost Ark, but more often than not it is The Imperial March played on repeat as K. builds block spaceships and plays with his ( bottle cap ) storm troopers. Y. was awaken this morning because K. was playing The Imperial March so loudly. She is a child who enjoys sleeping in, so this did not fill her with joy.  With the toy loft right outside my studio, I spent my afternoon working on a quilt with The Imperial March in the background.  (I'm making progress. Want to see?  I'm still playing around with it, but I'm pretty happy with th
1 comment
Read more
More posts

Here some articles I've written which appear elsewhere. You can also find my writing at The End in Mind and Adoption.com
Taming the Teenage Schedule
***
5 Secrets to Surviving the Toddler Years
***
Raising Creative Kids
***
The Family that Cooks Together
***
Adopting and 11th Child
***
Dear Struggling Mother, part 1 of 2
***
Dear Struggling Mother, part 2 of 2
***
A Winter's Worth of Books
***
Adopting a Child with a Facial Difference
***
Looking Past the Needs to See the Child