October 04, 2010
Obviously, my computer has been returned to health.  I forget how much I use it throughout the day when I don't have it available.  But it did enable me to focus on apples.  All day long.

First, let me show you my newest toy: 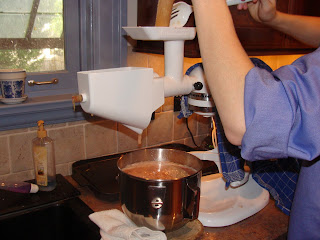 This is an attachment

for my Kitchen Aid mixer which strains fruit.  Before I have always used a Foley mill

to strain out the seeds and skin from the cooked apples.  It was effective, but time consuming and made for sore muscles.  Then I came across this nifty tool which attaches to the pasta maker/meat grinder piece which I already had.  (If I hadn't had two of the three pieces necessary, I probably wouldn't have bought it.)  It is amazing, and I will sound like an advertisement for a brief moment.  It took B. and me just two hours to prepare, cook, and strain a bushel's worth of apples.  It was super fast and did a better job of straining than the Foley mill did.  In the picture above, you can see the hopper, which is part of the pasta maker attached to the mixer.  The fruit strainer then attaches below that.  Inside that large white piece is a mesh sleeve that the fruit is pushed through.  The pureed fruit comes through one side and the leftovers come out the other.

In this picture you can see the bowl of apple sauce and the skin and seeds which have fallen in the sink.  It was a little messy, but not any messier than the hand mill and certainly a lot faster.  I'm spending so much time sharing it with you because I didn't know this part existed.  I'm so glad I found it and thought you might like to know about it as well.  Especially if you already own the mixer. 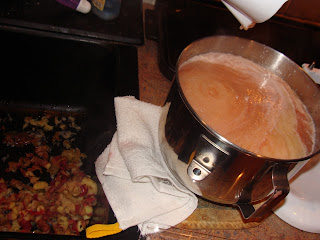 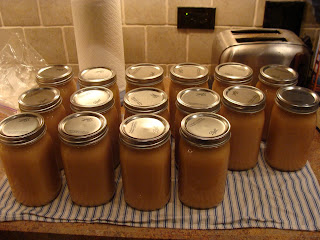 But now to what you are really hanging around for... the recipe for the apple cider doughnuts.  I have had this recipe for so long, I don't remember where it came from, so I'm unable to give credit where credit is due.
Apple Cider Doughnuts (makes 12 doughnuts)
2 1/2 c. all-purpose flour (though I have used whole wheat as well.)
2/3 c. sugar
1 1/2 tsp baking powder
1 tsp cinnamon
1 tsp nutmeg
1/4 tsp salt
2 eggs
1/3 c. apple cider
4 TBSP butter, melted
vegetable oil for frying
In a large bowl, sift together [I never sift.  I stir well with a fork.] the dry ingredients.  In a separate bowl, whisk together the eggs and cider.  Stir in the melted butter.  Make a well in the flour mixture and stir in the wet ingredients.  Turn the soft dough onto a lightly floured surface and pat it into a 1/2-inch high round.  Heat 3-inches of vegetable oil in a deep pot over medium heat.  Use a doughnut cutter (or a glass and poke holes in the centers) to form rings.  Once the oil begins to bubble, use a spatula to carefully lower a doughnut into the hot oil.  You can cook several at once, just don't crowd them.  Once doughnuts rise to the surface and begin to brown, flip with spatula.  Remove after ~2-3 minutes or when golden brown.  Drain on paper towels.  Stir together glaze (recipe follows) and spoon over doughnuts.
Glaze
1 1/2 c. powdered sugar
3 TBSP apple cider
Stir together with a fork.
____
There are non-cooking posts to come, if I can ever get all of this food taken care of.  If all I talk about is cooking recently, it's because it's all I feel as though I'm doing.  Maybe we can get back to a normal schedule this week.
homemaking recipes

Anonymous said…
Thanks much,
We will be doing apples this week too! My kids are looking forward to the doughnuts.
Thanks,
Kim
10/04/2010 1:49 PM