Day 6: That horrible sound you heard? That was me grinding my teeth in fury

March 17, 2012
We began the day with a trip to the clinic that does the physicals for visa applicants.  I don't think I can convey the unique sense of chaos that this involves.  See this picture?  This is just some of us waiting for whatever step comes next.  (There are three stations you have to visit:  general medical history, vital statistics, and the ENT. Essentially you just get in a line and hope you picked one that moves.)  What this picture doesn't convey are the other hallways also filled with people, the noise of so many people talking and an equal number of children screaming, and the stuffiness of a not-quite-air-conditioned enough building. 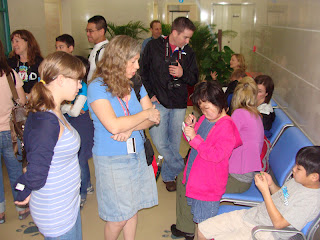 But all of this inconvenience pales in comparison to what my daughter had to endure.  While things each happen in their own room, there is little privacy so you can see what is happening with everyone else.  This is why I can definitively state that my daughter received very different treatment.  The doctors we saw evidently had a degree in humiliation.  It was evident with their facial expressions, demeanor, and outright poking and prodding that my daughter was not a child, but a bizarre specimen to be openly gawked at.  I kept getting mental images of the drawings I've seen of potential slave owners at a slave market.  Their faces expressed the same sort of detachment to my daughter as a human being as the slave owners did to the slaves they were inspecting.  I watched my daughter just shut down, I could see her personality disappear as this continued.  And I couldn't stop it.  Perhaps it's just as well I don't speak Mandarin, because I was so angry by the end that I just might have caused an international incident.  Even writing down the description of it has caused my adrenalin to kick in.  And what's worse, we have to go back to the same clinic to have her TB test read in a couple of days, so I couldn't even tell her that she never, never, never has to go back to that place and go through that humiliation again.

I am happy to report that the day got better from here.  We returned to the hotel and decided to take a walk in search of lunch.  In doing so, we wandered down a little alley which turned out to be a dead end, but had some exercise equipment.  (In China it seems, there are parks with lots of exercise equipment for adults, but not playground equipment for children.)  Of course, my three had to try it out. 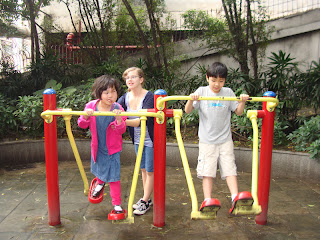 After lunch and a rest, it was time to try out the pool.  At least J., A., and TM tried out the pool.  H. and I tried out the chairs on the side of the pool.  It is much warmer here than it was in Zhengzhou so that it is comfortable swimming in an outdoor pool.  Here at our hotel, it's on the fourth floor and is quite lovely. 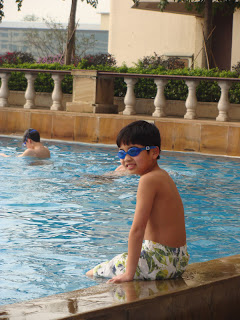 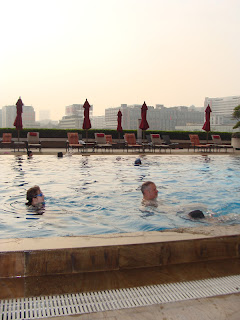 The day ended with a group dinner at a local restaurant which everyone enjoyed.  (It has been fun to get to know the different families in our group.  We feel blessed that all 14 [yes, we've added one more] are very nice and we enjoy their company.)  So, the day wasn't a total bust.  With an early bedtime tonight, everyone should be ready to head out early tomorrow to go and visit the safari park.  Where rumor has it they have pandas.  I think I've mentioned I like pandas, right?
adoption China travel

Anonymous said…
Sounds like the Mama Bear instincts kicked in. I am so sorry this had to happen. Thank the Lord that H. now is in the loving care of her parents. I am glad she recovered so quickly from this incident. I will pray that the TB reading is just a quick in and out. Enjoy the safari and the panda bears. Can't wait to see the pictures.
Kim Crawford
3/17/2012 8:36 AM

jan said…
the one good thing -- you experienced the awesome feeling of "this is my child and you better not mess with her!" which outs the mama in us to the fullest extent! glad the day picked up from there :) xoxo
3/17/2012 3:38 PM

Stevens Family said…
What a yucky experience :( Some people are just so blatantly insensitive. If they've never seen the difference your child has, they gawk, point, stare, whisper, laugh :( Sadly, I've found that teen girls are the worst. We had a couple laugh and whisper comments the other day when we were getting into the car. I'm glad Autumn didn't notice.

Anonymous said…
This is horrid. The worst is knowing that the shut down kicked in and this must have happened in the past as well. The slave prodding is such an good analogy. Horrid.