Day 10: We go in search of the statue of five goats and I end up talking about food

March 21, 2012
Bright and early this morning was our consulate appointment. It was very quick and compared to the process in Vietnam, unbelievably easy.  Pretty much, you turn in your documents, the person at the window double-checks that everything is there, you sign a form, and you wait a day for your visa.  The other difference is that the group of adoptive parents has a group swearing in where we state that everything we've said is true.  I have to say didn't miss the mini-interrogation.

We then has the rest of the day free.  Eventually, we decided to head across the street to investigate Yuexiu Park.  (You don't actually cross major streets here... you either go over them or under them.  We went under by entering the subway by our hotel and then exiting the subway by the exit on the other side of the street.)

Yuexui Park is beautiful and huge.  We spent a long time walking around and only saw a fraction of it.  Here are J. and the children as we began our walk.  We set out to look for the Statue of Five Goats, which is supposed to be rather famous. 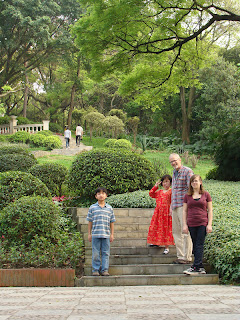 Here is H. after having climbed up many, many steps.  I think her endurance is improving because she is still smiling and not once during our walk did she tell us she was tired. 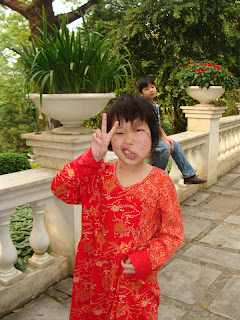 My sharp-eyed children spied these (and many others) along the path.  We only let them pick-up the empty shells and I made a mental note that I don't think I want to be around at dusk or sunrise.  There were a lot of snail shells. 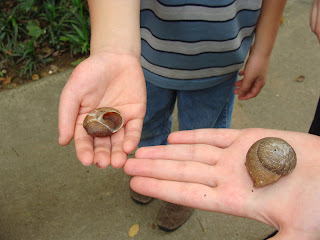 The park has dozens of interesting staircases leading off the main path.  TM really wanted to explore each one, but we would not have made any progress if he had.  We did let A. and TM climb up this one.  It turns out there was a hidden tennis court at the top of this staircase. 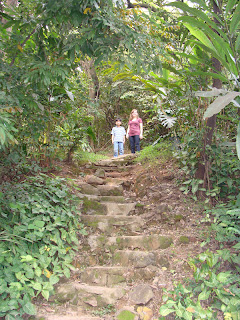 We found a sculpture garden... 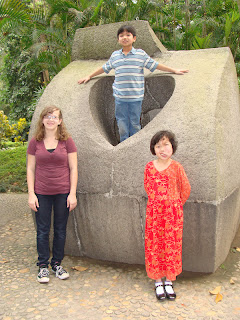 and many flowers.  H. was particularly taken with these fluffy flowers, so TM found some that had fallen on the ground and H. put them in her hair. 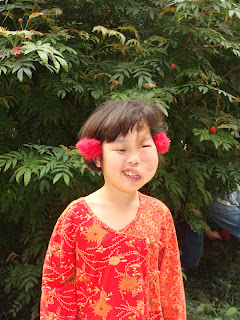 We came to a lake with paddle boats and J. decided to take people on it.  I opted to stay on shore and take pictures.  (I'm not really a fan of paddle boats.  They're a lot of fun for the first half and not so much for the second.)  H. really enjoyed it.  (A. is also in the boat, I just happened to cut her out of this picture.) 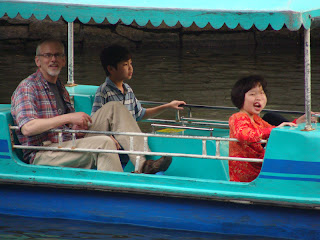 It was a very scenic lake they floated around. 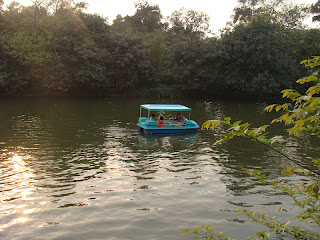 I was quite happy with my nice garden path.  See, they even put up a sign so I would know what I was walking on. 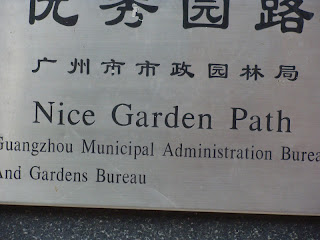 Of course, nothing is perfect.  I hope I did my part to keep the danger away. 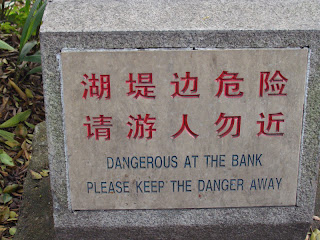 We followed up with some ice cream.  Once again, I have to be careful of stereotypes.  As the children were eating, a small group of overly hip twenty-somethings walked past and noticed us.  I braced myself for what seemed like the inevitable staring and pointing, but I was wrong.  The young woman in the group approached and then handed J. a stack of tissues so that TM and H. could wipe their mouths after their ice cream.  It was completely unexpected and very sweet... and I felt a little ashamed that I had jumped to a negative assumption.  We are developing such a positive impression of the Chinese people. 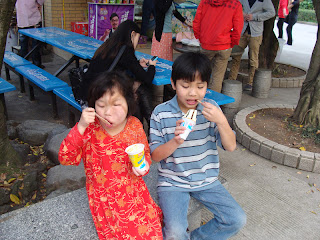 Looking at this picture of these two enjoying their ice cream makes me realize that I have never mentioned the breakfasts that we have been enjoying.  Breakfast buffets at hotels in China are a pretty big deal.  At each hotel we have stayed at they have gotten increasingly large.  The buffet at the China Hotel is almost too much... you just don't even know where to begin.  There are at least five long counters filled with food.  Chafing dishes with Chinese items; a French toast and waffle bar; fruits of all kinds; a long table full of pastries; omelet and egg stations; a sandwich station; chafing dishes of American foods; and a juicing station.  Even with that list, I'm sure I'm forgetting something.

The first week of breakfasts, H. wanted to take everything she saw, whether she really wanted it or not.  The first few days she ate every scrap of it.  The next few days, she would leave just a little.  Now at our current hotel, she has been changing her pattern even more.  She has actually started to say no to more than a few things and has begun to leave food on her plate when she is full.  I think this is a very positive step.  It was a little unreal watching this tiny girl eat two very full plates of food at breakfast and I'm happy to see healthier patterns begin to develop.  I have a feeling breakfasts at home are going to be a sad disappointment to her, though.

Tomorrow is our last day in Guangzhou.  We have another outing planned and I think we're going to try to hit the markets on our own one more time.

And we never did find those goats.
adoption China travel

Anonymous said…
So glad to see that the weather is treating you well so you can get out and enjoy the beauty. I have to admit with the previous commenter about TM putting flowers in H.'s hair. Very precious. H. looks so pretty in her dress. It seems like you have a very girly girl on your hands. I think she will fit in nicely with the twins. Looking forward to seeing about your time at Shepherd's Field.
Blessings to all,
Kim Crawford
3/21/2012 1:33 PM

Anonymous said…
I was taken with the warning photo. When I tried to google it, at first I found warnings of counterfeit bills circulating in China and how a person got locked in a cab with no way out when they paid with money they gotten as change that turned out to be counterfeit (fortunately, that person had other money that wasn't counterfeit).

Then I found that I had typed in it in goggle wrong. It is trying to tell people to stay away from the river's edge or bank of the river and to please avoid the risk of getting to close.

Mystery solved and now it makes sense, but I liked my out loud laughing when I first read it and was picturing something different.

Janet and Kevin said…
The picture of H. with the flowers in her hair is so adorable! How happy and content she looks being with her new family.

Got tickled at the sign pictures. Loved seeing the translations on the signs all over China! One on our trip said, "Do not walk on the frozen ice" in very large letters, but of course, dozens of Chinese people were walking on the ice! Too funny!

Have a wonderful last day there and a safe and calm trip home.